The Art of the Visionary Scientist

How Santiago Ramón y Cajal’s drawings helped found neuroscience, and how today’s high-tech images show us ever more about the brain 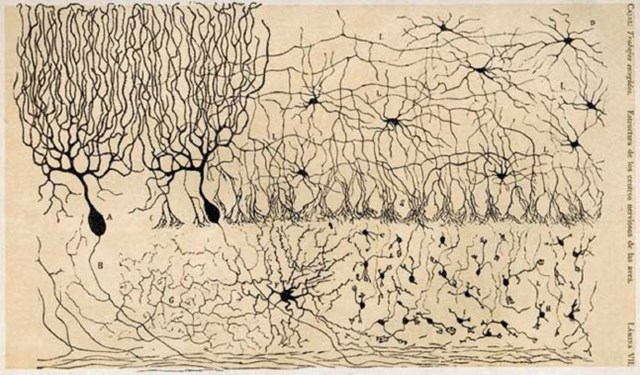 For centuries, the brain has been a mystery, a blank-enough slate that scientists, artists, philosophers, and the like could imprint it with their own theories. It was only with the development of microscopes and other imaging and research techniques that the exquisite structure of the brain came into focus.

In the late 1800s/early 1900s, a man equal parts scientist and artist – Santiago Ramón y Cajal – laid the foundation of modern neuroscience through his detailed, meticulous, graphically impeccable drawings of axons, neurons, retinal structure, and other new (at the time) elements.

In that era, scientists were still debating how the nervous system worked, with the predominant theory being that it was a single interconnected network, sort of like a fishing net or soft grid. Cajal believed otherwise – that the nervous system was comprised of billions of separate elements (today known as neurons) that worked together, and depicted this structure in his drawings of brain and nervous system cells.

In 1906, he won the Nobel Prize in Physiology or Medicine alongside Camillo Golgi, “in recognition of their work on the structure of the nervous system.” It took the development of electron microscopes, but Cajal’s theory was proven right. (Notably, Golgi held the “single network” theory – and yet it was Golgi's own innovative method for staining nerve cells that led Cajal to the correct interpretation of the nervous system.)

Above and beyond his scientific influence, Cajal’s drawings still gain accolades in the art world. A traveling exhibition, The Beautiful Brain: The Drawings of Santiago Ramón y Cajal, is taking place through April 2019; see if it’s coming to your area. It’s worth a visit.

Just as many of Cajal’s drawings of, for example, cells in the pigeon cerebellum look like otherworldly trees, Weizmann Institute neuroscientist Prof. Oren Schuldiner studies “pruning” of such trees. The continual process of axonal growth, cutting back, and then sprouting of new patterns of neuronal extensions keeps the brain flourishing with precision.

And, a few decades ago, Weizmann’s Prof. Amiram Grinvald and scientists at the Max Planck Institute of Psychiatry developed a new imaging technique that revealed the architecture of the brain, showing that brain cells engaged in different tasks in the visual cortex form orderly, elegant “mosaics.” The scientists follow in the footsteps of Cajal, who made some of the first (stunningly beautiful) studies of the retina more than a century ago.

New technologies are advancing neuroscience imaging and understanding at an unprecedented rate; for example, fMRI, which allows scientists to see the brain in action, has been in widespread use for a only few decades, yet has wholly transformed how we see the brain in health and disease.

That’s why we are so excited about the Weizmann Institute’s new Azrieli National Institute of Human Brain Imaging and Research, which will house a 7 Tesla MRI, a machine so powerful that it can distinguish between types of brain matter. This can help guide treatment options for people with epilepsy, multiple sclerosis, and other neurological diseases.

Besides helping push neuroscience into the future, we are sure – as Ramón y Cajal did – that the images on their own will be as beautiful as the brain itself.

◅
Previous Post New Year of the Trees
Next Post As Viruses Evolve, A Flu Shot That’s Worth the Pain
▻
comments powered by Disqus