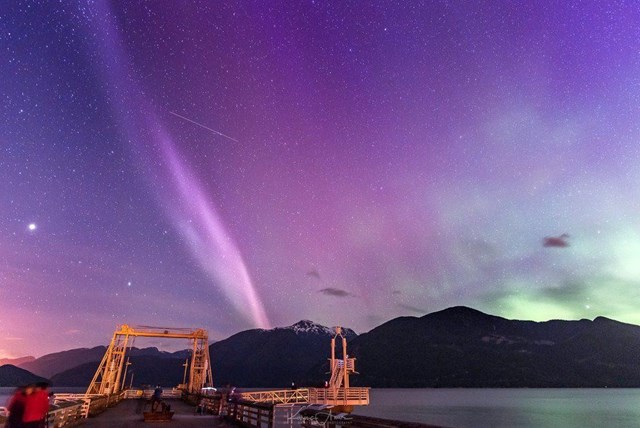 The universe is big. While that’s a ridiculously oversized understatement, such vastness means that there’s much to see and learn – and scientists can’t be everywhere. Enter citizen scientists: knowledgeable amateurs who contribute to research by looking for new phenomena, species, etc.

And it’s thanks to citizen scientists that we now know about Steve.

In 2017, the Alberta Aurora Chasers – who photograph auroras in the Canadian province for which their group is named – identified a strange atmospheric phenomenon that was unlike the auroras they typically observed. It was ribbon-like, vertical, and purple with, at times, green edges.

They named it Steve.

The group was convinced that Steve was something special. Like all great ideas, theirs took root at at a bar, where the Chasers showed their Steve photos to University of Calgary physicist and astronomer Dr. Eric Donovan.

Donovan thought the images were beautiful, but wasn’t sure what they showed. (Spoiler: he went on to co-author the first Steve research paper.

Intrigued, he delved into data from the European Space Agency’s Swarm satellites, which measure magnetic signals from parts of the Earth and its atmosphere. As The New York Times says, he then was able to explain that “Steve is a strip of ionized gas moving through the air at about four miles per second, with temperatures as high as 10,800 degrees Fahrenheit — as hot as the earth’s core. It is about 16 miles wide and thousands of miles long, flowing from east to west across Canada.”

Steve also appears farther south than most auroras, which means that more of us have the chance to see an aurora in magical action.

The Juno mission to Jupiter, for example, has also provided surprising information about a planet’s atmosphere. Weizmann’s Prof. Yohai Kaspi is a Juno project leader, studying the giant planet’s gravitational field and atmosphere

Some of the mission’s results to date include the fact that Jupiter has a much stronger than expected magnetic field with great variations in power.

That erratic magnetic field has been a particular revelation. Weizmann’s Dr. Eli Galanti said that everyone expected a homogenous field – not one that drastically changes from point to point. The discovery produces new challenges, but also “allows us to sharpen the existing models,” he says. That will help other researchers study other planets, too – perhaps even ours?

One thing these studies have revealed is that atmospheric phenomena, no matter which planet they grace, are awe-inspiring and beautiful. Can science quantify beauty? The data about chemistry and gravity and magnetic fields and so on help explain it, but don’t inspire the under-the-breath “wow” of images of mighty Jupiter… and Steve.

◅
Previous Post A World Without Coral Damages Us All
Next Post Toxic Migration: Cancer Cells on the Move
▻
comments powered by Disqus