Day Zero: What Happens When the Tap Goes Dry? 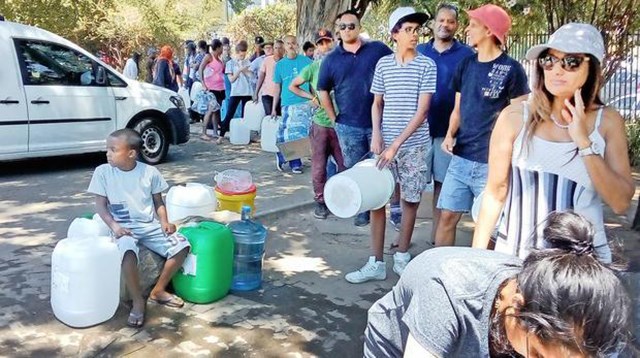 They are us: Cape Town citizens endure long lines to get water, which no longer flows in their homes. Credit: IOL South Africa

Cape Town, South Africa, may very well become the first city in modern times to run out of water. The day they expect the taps to run dry is called Day Zero, the scarily named first day of an unwanted new era.

Most of us modern sapiens have never had to truly manage our water; we take daily showers, leave it running while we brush our teeth, we dump gallons of it down the drain without a second thought.

Let us, then, look to Cape Town, which is enduring a three-year-long drought so severe that it’s considered the worst in more than a century. Thanks to strict rationing and a no-punches-pulled awareness campaign, the water crisis has eased somewhat and Day Zero has been moved from mid-May to mid-June, with some reports now saying it may be staved off until 2019. However, as the city’s mayor said in a recent press conference, “We are past the point of no return.”

But people – regular people, like us – have made a difference. As cited in a piece on NPR, another city official said that “frugal residents have helped ... Since January, water consumption has fallen from over 600 million liters a day to about 520 million.”

Nonetheless, limits on consumption have been tightened to a challenging 13 gallons per person per day.

(Could you get by on that amount of H2O? The EPA says that “each American uses an average of 88 gallons of water a day at home.” Add to that what you use at work, school, or just being out in the world – it’s likely well over 100.)

This is reassuring proof that each person’s efforts are more than just, um, a drop in the bucket – they add up to make real-world, life-affecting differences.

But keeping the water flowing requires more than curtailing use. Other efforts being made in South Africa include desalination plants, which officials are scrambling to complete.

As another hot country coping with limited water, Israel has long led the way in large-scale desalination. However, besides simply de-salting, sea and ocean water must also be cleaned.

Weizmann alum Dr. Dalit Vaizel-Ohayon, who received her PhD from the Department of Molecular Genetics, is now chief bacteriologist at Israel’s national water company. Each day, she is responsible for nothing less than keeping the country’s entire water supply safe. (And you thought your job was stressful.)

Dr. Vaizel-Ohayon’s team must work fast to study and treat the water before it reaches people’s homes, so she has begun implementing a range of rapid-testing technologies such as qPCR (quantitative polymerase chain reaction), which allows them to look for fecal coliform, streptococcus, and parasites. She’s even looking at the microbiome of water to enable more precise targeting of troubles.

Of the many reasons Cape Town’s situation is so alarming, a major one is that it had been actively working to prevent such a catastrophe. As The New York Times says, “It wasn’t supposed to turn out this way for Cape Town. This city is known for its strong environmental policies, including its careful management of water in an increasingly dry corner of the world.”

Clearly, no matter what, we need to take steps both large and small, as individuals and societies, from supporting research on water protection to turning off the tap when washing our hands. Cape Town’s Day Zero is our Day Zero.

◅
Previous Post As Viruses Evolve, A Flu Shot That’s Worth the Pain
Next Post The Sahara’s Gritty Superpower
▻
comments powered by Disqus